The reason I am not talking about World Cup

Many foreign readers of my blog wrote about their enthusiasmus towards Brasil`s team on Germany World Soccer Cup.
I´m going to disappoint you a little bit, but I am not a fervorous soccer fan anymore. At least this time.
In 2002 when we won Japan/Korea cup we were in the middle of a presidential campaign too. But it was very different.
Lula da Silva uses Brazil´s team as a propaganda tool so heavily that disgusts me.
Our president had given - in almost four years in presidency - just one collective interview, but it is unacountable times the he used soccer or metaphors on soccer to sell his point of view.
He even framed an interview by satellite with our team on Germany. It was a show made to Lula to shine. No player could ever ask to the president. Just to answer what he asked.
It was this event Ronaldo missed, and Lula asked the coach, Parreira, about Ronaldo´s weight.

The fact that Brazil´s team is a mere propaganda tool for Lula. That´s why I have doubtful feelings about Brazil´s soccer team.

But let you know that I am a Portugal fanatic right now!
Portugal is coached by Luiz Felipe Scolari, former Gremio Football Club´s coach (my favourite soccer team in Brazil), was born in Passo Fundo (the same city that I used lived) so he is "gaucho" like me.
"Gauchos" feel like a breed apart. We are not "brazilians" at all, we not share the same taste for 'butts' and 'samba' like regular brazilians do. I think it´s because here is the most cold part of Brazil. Rio Grande do Sul is not "tropical" and I think the we- gauchos - share the "southern sadness" or "Iberic sadness". Our music is totally different from Brazilian music too - we are nearer from Spain, Flamenco and Tango than Samba and Caipirinha.

But returning to the point, Larry Rohter - the NYTimes correspondent Lula tried to extraditated when he published a story on the drinking habits of our president - wrote an article about the political use of soccer.

This article is partially correct. But it fails miserably - according to the NYT tradition of hiding-the-truth - when it started to comment the relation of soccer and the military government in Brazil. They used false terms to qualify General Emilio Medici president as "The executioner".

Brazil´s "victims" of military rule are in number of around two hundred people. Just like the innocent killed by the red terrorists (around two hundred too). All "victims" were terrorists killed in the battlefield. They are the very responsable for their own deaths when they decided to implement a communist dictatorship in Brazil.

The big lie was that they were "freedom fighters". No, their fight started BEFORE the beginning of the military rule and was the main cause of military reaction.
Other fact is that Emilio Medici government (1969-1974) did not need soccer to embellish his poll rates.
First - we did not have direct presidential elections (they were decided by a electoral college unitl 1984) that time.
Second - Medici was approved by 80% of the country!! There´s no need to use this. We had public security, we were know as the faster-growing country in the world! We have jobs, we had sovereignty.

That was the truth.

After this little introduction, here is Larry Rohter article. 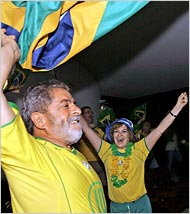 "With the knockout round in soccer's World Cup under way and an election looming, President Luiz Inácio Lula da Silva has found the perfect way to combine his two main passions: when the opposition complains about incompetence and corruption in his government, he responds by linking himself to Brazil's wildly popular and successful national team.(..)"