Reading the news today I found this very insteresting: 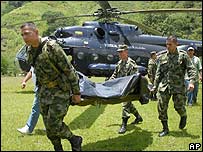 country's largest left-wing guerrilla group, the Farc, during an


The Colombian defence minister described the death of

capacity. Medina was said to control the Farc's drugs and weapons-smuggling operations."

This is why Colombian President is Uribe is so hated by the left. FARC is the drug-smuggler-terrorist-arm of the leftist organization called Foro de São Paulo.

Foro de São Paulo is on the power after the leftist surge in Latin America. Brazil (Lula), Venezuela (Chávez), Bolivia (Morales), Nicaragua (Ortega), Equador (Correa) and Argentina (Kirchner) are presidents that are controlled by the Foro.

They are the real "Mandchurian Candidates" of our time. Behind these are the Dark Side of The Foro, a group of tyrannical regimes (Cuba, China) and terrorist groups (Colombian Farc , MIR) that take part of the group.

Alvaro Uribe, by killing Medina , has killed not only the "head" but the heart of FARC´s foreign relations. Medina, known as "Black Acacio" (Negro Acácio) was the biggest Brazilian drug smuggler body guard (Fernandinho Beira Mar, now reclused on high security prison in Brazil) . Was known that Fernandinho was the FARC´s head-of-the-bridge cocaine smuggler in Brazil, intented to anihilate the competitors in Brazilian drug market and be the number one there.

It was also known that FARC was given lots of money to President Lula´s campaign in 2002. Read it here.

Presidente Alvaro is the only and lonely president that is looking only towards his people and country. He is surrounded of fake democratic regimes that intent to implement a new communist federation in Latin America.

They are closer day by day, but events like this could make it slower.
It was a little victory, but with no help by the US, this island of real democracy in Latin America will soon disappear.

The FORO de SAO PAULO is an arrangement whose head is Lulla da Silva and his Party PT, from Brazil. Originally it came from Fidel Castro.

That is why the corruption has increased so much during Lulla government, in order to finance the revolution.

They plan to create the socialism in South America. The hatred to Americans is widespread among those people.

I wonder why USA accepts this so peacefully.