http://www.youtube.com/watch?v=IZGTV6FbBXM&feature=related
Posted by Luís afonso at 10:09 AM No comments:

I ´ve just received an award from Zurema of "Amañecer en la Habana"!

Swimming against the red tide

"So the boys of Hamas have used us as target"
Gaza residents accuse the Islamic militants: "We prevented from leaving their houses and shooting from there"

At last - and I hope not least - an effort emerge from South America democrat-conservative people to try to stop the madness of the Sao Paulo Forum.
I was invited to join. And I agreed.

Delegates of several Latin-American
Non Governmental Organizations (NGOs) gathered in Bogotá , Colombia ,
between December 12 and December 14, 2008, to explore ways to defend
democracy and freedom, which has been severely restricted and
threatened in the continent. The delegates decided to establish a
confederation of NGOs – christened UnoAmerica — to pursue their common
goals.  UnoAmerica will primarily function as an instrument for Latin
American democratic sectors to exchange information, coordinate action,
and support each other. The Final Declaration signed by the delegates
is the following:

The failure of
governments to eradicate poverty in Latin America , in spite of it
being the richest continent on Earth, allowed the growth and
development of the Sao Paulo Forum (FSP), an organization that brought
together all the leftist movements and political parties in the region,
including the Colombian narco-terrorist guerrilla group FARC (Colombian
Revolutionary Armed Forces).

The members of the Sao
Paulo Forum take advantage of people's needs in order to manipulate the
poor, promising “social justice” and better economic conditions.
However, once in power, they don't solve any of the crucial problems in
our countries, but instead introduce Marxist ideological models that
divide our societies into factions based on class and race, promoting
hate, violence and anarchy.

At present, there are
fourteen Latin American governments connected to the Sao Paulo Forum.
Although most of them reached power through democratic elections, some
are destroying democracy from within, eliminating separation of power,
checks and balances and fundamental rights. Such is the case with Hugo
Chavez ( Venezuela ), Evo Morales ( Bolivia ), Rafael Correa ( Ecuador
), Cristina Kirchner ( Argentina ) and Daniel Ortega ( Nicaragua ).

To achieve their goals,
the members of the Sao Paulo Forum do not resort to firing squads to
eliminate their enemies, as was done in Cuba by Fidel Castro, the most
prominent founding member of the FSP. They now use more modern and
sophisticated methods. One basic process is through constitutional
reforms that allow them  to control all three branches of power, and to
remain permanently in the Presidency. Elections are rigged and voting
secrecy is, in practice, eliminated. Although these attacks on
democracy are executed quite openly, other “moderate” members of the
FSP -- Brazil 's Lula da Silva (co-founder of the FSP along with Fidel
Castro), Uruguay 's Tabaré Vázquez and Chile 's Michelle Bachelet --
don't complain or criticize their radical counterparts.

The FSP has a
transnational project that disregards national borders or sovereignty.
To achieve their goals, FSP members intervene in the internal affairs
of other countries, funding candidates of their liking, supplying
military equipment, and even making decisions on internal conflicts
using related organizations such as the Union of South American Nations
(UNASUR).  Democratic political and social forces, on the other hand,
have so-far limited their action to their own national territory.

These two very different
methods of operation have so far placed Latin American democrats at a
serious disadvantage, hampering their ability to counterbalance the
advance of the FSP. UnoAmerica is an attempt to correct that imbalance.

In addition to the goal
of counteracting FSP, UnoAmerica will design economic programs to
promote industrialization and development in our continent, in order to
help solve the oldest and most serious problems in our region –
poverty, illiteracy and even hunger -- as an antidote to
totalitarianism.

Poverty and illiteracy
are the main barriers to the consolidation of democracy and freedom in
Latin America . There are no other real obstacles to development in a
region full of resources.

We invite all democratic
forces in Latin America to join this initiative. We invite them to work
together to promote a better future in which freedom, social justice,
solidarity and integration, and the rule of law will prevail.

Posted by Luís afonso at 9:52 AM No comments:

Posted by Luís afonso at 1:06 PM No comments:

Email ThisBlogThis!Share to TwitterShare to FacebookShare to Pinterest
Labels: obama

Another Faked "Death" of Palestinian Boy?

Eight years ago, the world stopped by the horror vision of a man and his son being caught in the middle of fire between Israeli and Palestinians. The man was wounded and his son was allegedly killed by the Israeli forces.

After some research, a documentary came out showing that this event was totally staged by the Palestinian fighters and their journalist counter-parts to sell a twisted vision of the conflict.

Nowadays, the use of leftist media outlets (CNN, Reuters, etc) as proxies of the terror networks are common ground, but it seems that something emerged from the surface from time to time, afterall. H/T Little Green Footballs

Boy's death on video is a fake, blog says

WASHINGTON, Jan. 13 (UPI) -- A video of a 12-year-old boy allegedly killed in Gaza by an Israeli drone-fired missile, aired on CNN, is a fake, U.S. bloggers claim.

Dramatic video shot by the boy's older brother shows doctors trying to save the boy, his grieving family and the first part of a burial, IsraelNN.com reported. The family said the boy and a 14-year-old cousin were playing on their roof when they were by a missile fired by an Israeli drone supplied by the United States.

The family did not say how it knew a drone was involved, and no family member claimed to have witnessed the attack; doctors were massaging the child's stomach lightly, instead of vigorously massaging his chest; the boy was supposedly wounded everywhere by shrapnel, but there were no visible wounds on his head; and the rooftop on which he was purportedly killed showed only a small amount of damage.

CNN is standing by the report, IsraelNN said. The Israeli military said it had no knowledge of the incident.

Posted by Luís afonso at 2:06 PM No comments:

Email ThisBlogThis!Share to TwitterShare to FacebookShare to Pinterest
Labels: israel

I made this video from pictures I took at the Lighthouse of the Doyouro River, Porto, Portugal. Music: ELO (Waterfall)
Enjoy!
::

Part VII
Posted by Luís afonso at 10:17 PM No comments:

Vienna, Jan. 11, 2009 / (CNA) -- The chemist who made a key discovery leading to the invention of the birth control pill has written a commentary calling demographic decline in Europe a “horror scenario” and a “catastrophe” brought on in part by the pill’s invention.

Mr. Carl Djerassi, now 85 years old, was one of three researchers whose formulation of the synthetic progestagen Norethisterone marked a key step in the creation of the first oral contraceptive pill, the Guardian reports.

In a personal commentary in the Austrian newspaper Der Standard, Djerassi said his invention is partly to blame for demographic imbalance in Europe. On the continent, he argued, there is now “no connection at all between sexuality and reproduction.”

“This divide in Catholic Austria, a country which has on average 1.4 children per family, is now complete,” he wrote.

Djerassi described families who had decided against reproduction as “wanting to enjoy their schnitzels while leaving the rest of the world to get on with it.”

The fall in the birth rate, he claimed, was an “epidemic” far worse but less highlighted than obesity. In his view, young Austrians who fail to procreate are committing national suicide.
If it is not possible to reverse the demographic decline, an “intelligent immigration policy” will be necessary, Djerassi said.

According to the Guardian, the Archbishop of Vienna, Cardinal Christoph Schonborn, told Austrian TV that Pope Paul VI had predicted the pill would cause a dramatic fall in the birth rate.

“Somebody above suspicion like Carl Djerassi... is saying that each family has to produce three children to maintain population levels, but we’re far away from that,” the cardinal said.

Israel and Palestinians: What Really Happened

Posted by Luís afonso at 1:21 AM No comments:

The Intelligence & Terrorism Information Center has a report (PDF) on Palestinian rockets and mortar shells fired into Israel for the past 8 years, including this chart showing the rapid increase in attacks since Hamas took power in Gaza. 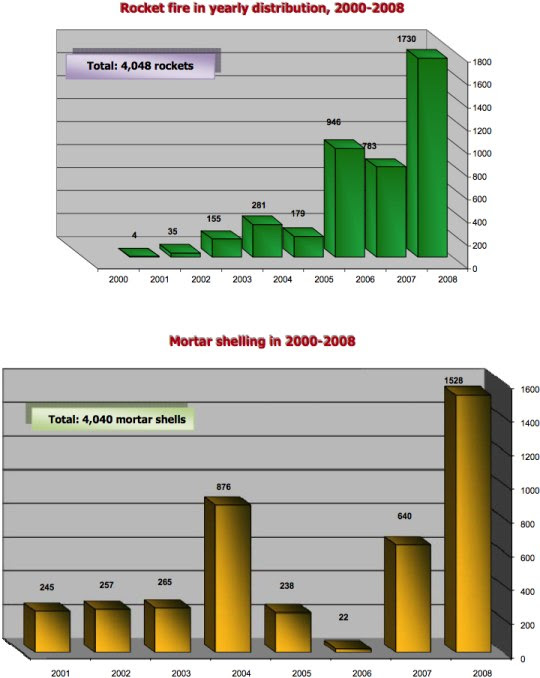 Posted by Luís afonso at 9:01 AM No comments: