"A Special Mission" is an account of Hitler's plot to overtake the Vatican and kidnap Pope Pius XII. Author Dan Kurzman interviewed SS General Karl Wolff, the man ordered by Hitler to carry out the plot. General Wolff, as well as other top SS officials began to fear the consequences of their actions in the event that Germany lost the war and the author contends Wolff struck a deal with the Pope to remain silent about the Holocaust in return for the safety of the Vatican. Dan Kurzman discusses his book at the New York Public Library.

H/T by James DeMeo, finally the movie made by the Dutch Politician Geert Wilders, that was almost banned from the "liberal" Holland. And even the States.
See if for yourself.

Posted by Luís afonso at 9:30 PM No comments:

Email ThisBlogThis!Share to TwitterShare to FacebookShare to Pinterest
Labels: fitna

The Sao Paulo Forum: From the past into the future

Brazil MSM was "suddenly" presented to the Sao Paulo Forum (Foro de Sao Paulo), in the streams of events ignited by the death of Raul Reyes, the spokenperson from Fuerzas Armadas Revolucionarias de Colombia aka FARC by a militaty mission commanded by Colombian President Alvaro Uribe.

From Reyes´ notebook files , captured by Colombian forces, it was clear the involvement (better, the engagement bonds) of Venezuela, Ecuador in financing the terrorist group.

"Foro de Sao Paulo" was the name uttered by many, as the dark force behind the revolutionary left offspring in Latin America.
Many disinformation outlets, even citing the "Foro" for the first time in their pages, noticing that PT and Lula da Silva created the Foro in 1990, created another lie. Now they claim that Brazilian President is no more a participant, that he even "blamed" his former group as crazy and the only link with them is in terms of Nostalgia and humanitary efforts to release FARC´s hostages.
Nothing is more false than it.
I discovered this interesting article that uncovers the Foro from the beginning. It was written in 1992 and describe what it is and what is the goal of such group.

Here´s the main objectives of the group:

At the invitation of Brazil's PT, in July 1990 representatives from forty-eight leftist parties, organizations, and fronts-including those mentioned above and others, among them the Cuban Communist Party--met in Sao Paulo to interchange ideas and experiences. The participants established the Sao Paulo Forum with the objective of developing unity and collective strategies and programs. The final resolution stated: "We express our joint determination to renew leftist thought, to correct erroneous conceptions, to overcome all bureaucratism and all obstacles to an authentically social and mass democracy."[1]

It seems quite rosy, huh? But what they really meant by "mass democracy"?
The leader of FMLN explained :
"The history of Eastern Europe made it crystal clear that absolute poweris an error and that people do not live on bread alone," affirms FMLNleader Joaquin Villalobos. "There is no democracy without revolution,and no revolution without democracy."

Is that clear now?
Here´s the full article

Posted by Luís afonso at 7:12 PM No comments: 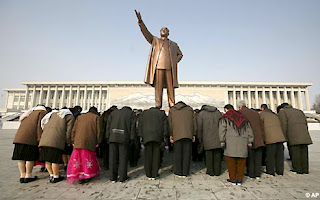 I´ve just received this: North Korea still the same.
And it reveals the same inhumane face of the "socialism" (you can see it here and here ), a word that in Latin America seems to be the Heaven´s Gate.

It is incredible: people that would die by famine were send to execution !!

Thanks JamesDeMeo for the link.

PS.: It is incredible 2: I ´ve check this news in portuguese. The information that the refugees were starving was hidden! That´s what I call "bias". "Folha de Sao Paulo", the biggest Brazilian Newspaper is a lefty news outlet. No wonder that they not talk about the communist take over Latin America, aka Foro de Sao Paulo, if they do not even publish bad news from North Korea.

And finally the same news that appeared in Folha de Sao Paulo (translated by google translate). Check it out.

Below , commentary from James DeMeo.

------------------------------
North Korea publicly executes 15 starving refugees fleeing to China in desperate search for food
I've gathered a lot of information over the years laying bare the horrible abuses against life and love within the Islamic world, in efforts to warn they are far more dangerous in totality than anything found in the West. But the Communist nations are just as bad, if not worse! Rather than demand everyone genuflect to the bloodthirsty Allah, the Communist delusion declares their own bloodthirsty Glorious Leaders as Gods, to whom people must genuflect as if they were Allah. Genuflecting is an old Saharasian trait, where delusional bloody psychotics think themselves to be up in the clouds, and everyone else low down in the dirt. The worst of them continue to be found within or at the border regions surrounding Saharasia, often mixing their communism with Islamism, and old Nazism (which is socialist at root), totalitarianisms which were all borne and bred in the antisex, antilife mileu of Saharasian warrior-cult armored ideology. Anything which is anti-love and anti-life, they can rationally mix into their existing culture, no matter what the superficial intellectual components -- they can even call themselves "people's republics" as the people are machine-gunned while searching for food. And just like the situation with submission-demanding Islam, we have plenty of people in the West who are in rapture to the Communist Church, quite willing to sell their families and neighbors into slavery if given the opportunity -- all "for the people", of course. Creeping Sharia Law and Creeping Socialism/Communism are diseases afflicting nearly every Western nation, to the detriment of their peoples lives and freedom. The North Koreans seem to epitomize the "pure culture" of the Communist Church today, having gone even further than Mao (if that can be imagined). They are to communism what Saudi Arabia and the Talibans are to Islam. The old Saharasian War-Lord mentality is alive and well, stealing everything into the hands of a powerful few, and viewing anyone not a member of their central dominating Military Caste as expendable garbage. J.D.

If you find this material of value, please donate to OBRL:
http://www.orgonelab.org/donation
Posted by Luís afonso at 5:07 PM 1 comment:

It is incredible! Colombian Army has spotted Raul Reys by a telephone call from.... Hugo Chávez. FARC´s best friend turned out to be their Nemesis.
It seems that Chávez is following the footsteps of his master, Castro, that send Guevara to a Bolivian revolution just to be located and shot-down.
It came from a Venezuelan blogger, Martha Colmenares, that reproduced a post from news outlet GLOBOVISION. In spanish.

Here are the main lines:

"News: According to RCN radio site, a telephone call from Hugo Chávez to the FARC´s spokeman Raul Reyes, allowed to the Colombian Army to locate the camp site where he was.. It was stablished, from a high rank intelligence source, that the number one in FARC´S hierarchy, the founder and leader Manuel Marulanda (TiroFijo) "is refuged in Venezuela".

Yep, is safer to be in Venezuela. In Colombia, if you receive a call from Chávez.. It´s done.

Posted by Luís afonso at 5:44 PM No comments:

A friend of mine just send me this: Where are all those who claimed Lula was a "counterbalance" to Chávez in Latin America?
Lula is the creator of the Foro de Sao Paulo, the evil organisation behind the "return of the living dead"-commies to power in the region and the most perfect imposter of Brazil´s history, pretending to be "not a leftist" anymore while helping his friends in Cuba, Venezuela, Nicarágua, Colombia (FARC), Peru and Bolivia. Here you can see him in his utter ugliness, just like an uncovered "Portrait of Dorian Gray".

Many people in North America fell into this trap so naively that it is difficult to explain. Only their wishful thinking could explain such distorted opinions on Brazilian president while he always said one thing but acted otherwise.

Financial Crime Consultant, for World-Check
More about the Author
Yet another high-risk indicator for Venezuela surfaces
2 March 2008
If you remember the chaos that surrounded the Lebanese Civil War (1975-1990), you know that financial institutions simply cannot operate under conditions of street violence. The tenuous situation in Venezuela could soon reach that state, in light of disturbing new developments that have come to light. Read the details below, and decide for yourself whether a civil war is on the horizon in Caracas.

Here is what we know so far:

a.. Four secret flights are scheduled into Venezuela, on TAM Brazilian Airlines, transporting 31.5 tonnes of firearms made in Brazil. The first flight has already arrived, carrying 1.5 tonnes of weapons; each additional flight is scheduled to bring in ten tonnes each.

a.. Whilst the exact types of weapons are unknown, one can safely estimate that between 50,000 and 70,000 weapons will be contained in these shipments, which are not consigned for the Ministry of Defence, but are to be quietly delivered directly to the Miraflores Presidential Palace, on the orders of Venezuela's President Hugo Chavez Frias. Why all the secrecy?

a.. In a country where the armed forces and the police are already well-equipped, these weapons can only have one intended use; to arm civilian supporters of the current regime, who will use it upon the opposition in an expected violent confrontation that could degenerate into a civil war.

A civil disturbance would result in the complete shutdown of the financial system in the capital. Watch for any preliminary signs of organised violence, closure of shoppes and businesses, and attacks upon civilians.
Posted by Luís afonso at 7:24 PM 3 comments: