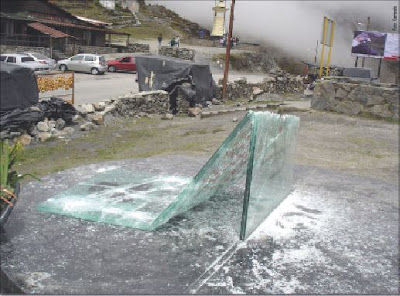 Che Guevara is Dead. But it seems irrelevant to all useful idiots that insist in wearing Guevara shirts around the world.
From Madonna to Maradona (?!!) there are a bunch of brainless socialist that love to praise a murderer.

This year is the fortieth anniversary of Che´s death.

As a homage to the "butcher" here some real news on the theme..

Che´s monument in Venezuela (Mérida) was vandalized and destroyed by a group called "Frente Patriótica de Paramo" that wrote this note:
"We Do Not Want Any Monument for Che, he is not an example to our children:
Industry Minister (and finished the Cuban industry)
Chancelor (and isolated Cuba from the rest of the world)
Cuba´s Bank Director (and broke the island)
A cold blooded murderer
Then, if Jorge Rodriguez (vice-president) and Chavez want their children to look alike Che, our no. In El Páramo NO.
"If you want to build a monument, that must be for J.F. Sánchez (teacher), an example of humility, love and wisdom. This one, put on Sabaneta" (Chavez´ hometown) 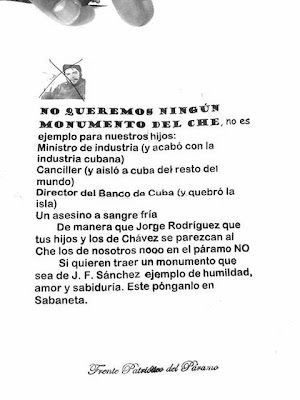