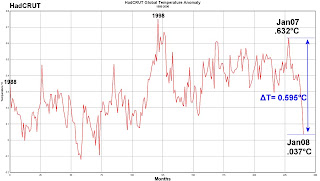 While tons of "Gores" claim their "incovenient truth", the weather kept oling...

"The "old climatology" which I was trained in and formerly taught in the universities, embraced the observed principles of homeostatic mechanisms -- or, self-correcting mechanisms -- by which both living system and larger ecological systems would adjust to compensate for changes.  Such was the foundation for Lovelock's "Gaia" theory of "Earth as living organism".  The generation which embraced Gaia has forgotten or never knew the science behind it, however, and instead has flocked to the CO2 theory of global warming.  But that theory basically ignores homeostatic mechanisms, and hundreds of years of empirically-developed climate science.


When you get hot, your body sweats and discharges heat by the mechanism of water evaporation from the skin surface.  Likewise, a global warming could trigger a global cooling by increases in evaporation from land and oceans, with subsequent increases in clouds and precipitation.  A global cooling always has been more dangerous given the predominance of increased glaciers, massive storms, shipwrecks, shorter growing seasons, failed crops, starvation and famine during such times.  Too much rains and ice can work a damage just as too little rains and heat.  Anyone who has read a bit about the Little Ice Age knows this, and doesn't necessarily fear a moderate global warming, which also happened in the past during the Medieval Warm Period, which was mostly a time of plenty and booming economies.  But the "new climatology" speaks of "tipping points", which is like saying, when your body gets hot, you don't sweat anymore.  Or when the atmosphere heats, clouds no longer form.  That could happen with a disturbed organism, or with a stagnated dor-choked atmosphere -- but that's not what is claimed by the advocates of Industrial CO2 greenhouse theory.  Irrespective of the theory one embraces, it is axiomatic that atmospheric warming evaporates more water, and from that, more clouds and precipitation as rain and snow. Snow on the ground then reflects sunlight back into space, and in a net sense the atmosphere cools.  Ergo, last year, and this winter -- breaking all records for snows and cooling world-wide, and confounding the predictions of the warming advocates.  Natural cycle?  Driven by solar variation (we are still waiting for the next solar cycle to start -- the sun seems to have the sunspot-switch turned off!)  Driven by cloudbuster operations within and surrounding the Saharasian Desert Belt, which suppresses the desert-drought heat-wave-producing dust-dor clouds?  Who can say.  In any case, here at OBRL Greensprings Center, we had a full 5 feet of snow on the ground by mid February.  Few here are old enough to remember anything similar.  Some photos from the 1930s suggest a similar snow condition, but not since.  It was literally up to the shoulders or the eyeballs, depending upon your height.  Nobody would believe it, so we made a short photo-essay, here:
http://www.orgonelab.org/Winter2008.htm


This record snow was not merely local but was typical of many other places in the Northern Hemisphere.  The article below suggests, a dramatic global cooling is in progress.  Expect a rekindling of all the public debate.  Possibly it is a short cold transient from a larger trend of continued warming.  Or the trend could be reversing.  I suppose we will all hear the claimed rise in human-produced global CO2 is responsible for this as well, just as it was firstly blamed for Hurricane Katrina, and later blamed for the absence of the failed prediction for even more hurricanes.  If anything like the Little Ice Age developed, the UN would insist everyone return to coal burning, cross-ocean trade and travel would become a risky enterprise once again, and we would be burning all those textbooks to keep warm in the dark.


The article below is a great summary.  Go to the original to review the imbedded weblinks, which provide more info.