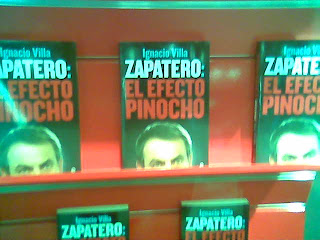 One of the best seller books in Spain is called "Zapatero: El Efecto Pinocho", by Ignacio Villa.
It describes the actual humour of Spanish people towards their premier.

("To say one thing and to do exactly the opposite. This is what consists the `Pinochio Effect´ that Zapatero uses whenerver he needs. A trick that confuses the ones that are next and please the ones that are far from him")

But no one can accuses Zapatero no to be grateful to his allies: as he was elected by the help of terrorists, he decided to help any terrorist since this moment on.
Was ETA responsable for the Atorcha bombings? Give´em a second chance.

Fidel is a tyrant? Let´s help him to calmy pass through this ill period, not bothering with such things like human rights, political prisioners and so on. "Give peace a chance"..


See it here (by bloggers for cuban liberty ) from Diario de Las Americas:
"The majority in the plenary session of the Chamber was against the motion made by the main opposition party, which asked the Spanish Executive to demand from the Cuban government the “immediate” liberation of 134 “political prisoners” condemned “for defending democracy, freedom and human rights” on the island.The text was rejected by a majority which accused the PP of being the “representative” in Spain of the American “empire."

Because of the recent trip to Cuba by the Foreign Minister, Miguel Angel Moratinos.The minister was heavily criticized by the Popular Party because, during his stay in the Caribbean island in April, he did not meet with Cuban dissidents.

Although it was hidden by some disinformation headlines like this one "Spain, Cuba to discuss human rights", while on the body explains

"He said "nothing has been excluded" when asked whether the freeing of jailed dissidents would be discussed at a first meeting on human rights scheduled for the end of May.
The Cuban minister, however, insisted that the release of jailed dissidents would not be the agenda. Perez Roque called them "mercenaries" paid by Cuba's arch-enemy, the United States, to "subvert" the political system born from Castro's leftist revolution in 1959."

"Cuba rejected EU aid in 2003 after European criticism of Havana for suppressing human rights.
The round-up of 75 dissidents and the summary firing-squad execution of three ferry hijackers in 2003 prompted the EU to shun high-level talks with Cuba and invite dissidents to events at European embassies in Havana, upsetting the Cuban government and leading to a freeze in ties.
Lower-level meetings resumed in 2005 at the encouragement of Spain's new Socialist government, but relations remain cool due to EU calls for the release of political prisoners.
There are more than 300 political prisoners in Cuban jails, according to the Cuban Commission for Human Rights, an illegal but tolerated group."

That´s it: Behind this façade of "democratic" and "multicultural" respect for the "differences" (Fidel, Cuba and terrorists like ETA) co-exists the anger towards the United States. This is what was called - using orwellian words - "double-think. It proves that the long-term strategy on demoralization described by that KGB defectors is still working. Communists and their socialists friends are in charge in so many countries that they act as a group.